Police Officers are delegated the authority and responsibility to protect life and property, and to apprehend criminal offenders. In the performance of these duties, officers may encounter resistance that necessitates the use of objectively reasonable force as authorized by law.

The Hillsborough Police Department (HPD) recognizes the critical responsibility that attaches anytime an officer uses force against a citizen as may be necessary to protect the community and enforce the laws. In addition, the HPD recognizes the need to treat all citizens with respect and dignity. It is the policy of the HPD that all members recognize the importance of human life, show respect for basic human rights and have an intolerant attitude toward abusive treatment of all persons. Nothing in this policy shall be construed to permit, excuse or justify the use of unreasonable or excessive force.

The Hillsborough Police Department requires all members to:

The information contained herein is designed to be a guide for officers in responding to a myriad of situations that are too numerous to predict. In all cases, an officer’s actions will be judged by an objectively reasonable standard – that the facts and circumstances, including reasonable inferences drawn therefrom, known to the officer at the time he or she uses force, could cause another reasonable officer to believe that force is appropriate and to have acted in a similar fashion.

Serious Physical Injury – a physical injury that creates a substantial risk of death or that causes serious permanent disfigurement, coma, and/or a permanent or protracted condition that results in extreme pain, loss or impairment of the function of a part of the body, or that results in prolonged hospitalization.

Deadly Force – any force which by its nature or application can be reasonably anticipated to result in serious physical injury or death.

After exhausting reasonable attempts to gain voluntary compliance, when it is objectively reasonable under the circumstances, and in accordance with North Carolina General Statute 15A-401(d):

Resistance is the immediately apparent (or reasonably anticipated by an officer based on their training and experience) unwillingness of a citizen to follow lawful directions and cooperate with an officer’s lawful performance of their duties; and/or actions that constitute an assault or put an officer in fear for their safety.

Resistance can start with questioning and passive behaviors and progress through assaultive behaviors to the use of deadly force. For the purposes of this policy, resistance is classified generally in the following continuum:

In all encounters a law enforcement officer has with citizens, the officer’s presence and ability to communicate are the first tools available to overcome resistance or potential resistance. Whenever possible, officers of the Hillsborough Police Department shall utilize every reasonable effort to gain voluntary compliance through communication before resorting to the use of force. Officers shall ensure that their identity is apparent and that they promptly inform a citizen of the reason for any detention or arrest unless doing so will compromise the safety of the officers or the effectiveness of the investigation.

E.   APPROPRIATENESS OF USE OF FORCE

NOTE: The choice of force option must always be reasonable and proportionate to the danger or situation the officer is facing. For example, the amount of force that is reasonable to protect property is less than what might be reasonable in response to a dangerous threat.

F.   USE OF FORCE CONTINUUM 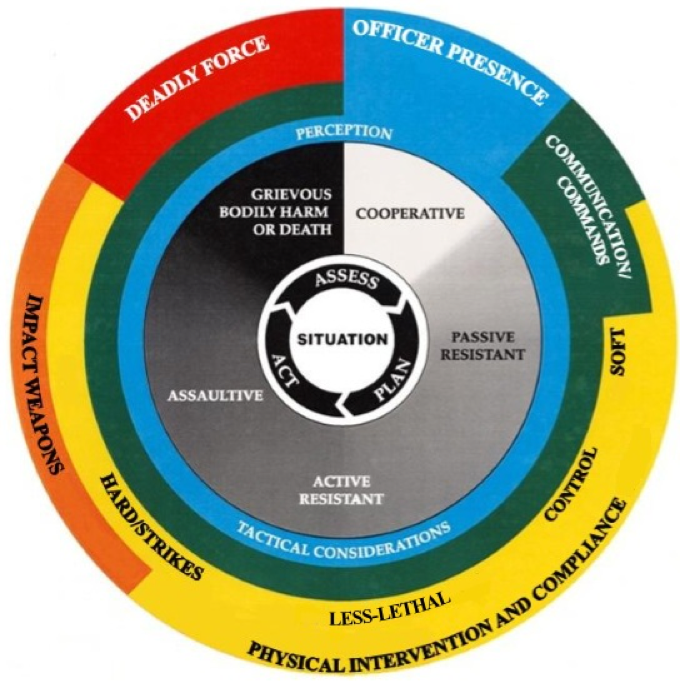 Officers must continually assess the situation and escalate/deescalate their use of force based on the circumstances they are facing.

The level of resistance being faced, the officer’s safety and the subject’s safety should all be taken into consideration when selecting a use of force option.

I.   SPECIAL SITUATIONS AND SPECIFIC PROHIBITIONS

K.   RESISTANCE AND USE OF FORCE REPORTING REQUIREMENTS

During the course of their duties, not every incident of physical contact or resistance encountered by an officer will require reporting under this policy. Situations that are resolved through an officer’s presence, commands and the soft-hand guidance required to effect an arrest are generally considered non-reportable unless they meet the reporting requirements described below.

L.   USE OF FORCE REVIEW/INVESTIGATION

N.   USE OF FORCE TO DESTROY ANIMALS

Officers are authorized to use force when it is reasonably necessary to end a badly injured animal’s suffering. Using force to destroy an animal is not considered a “use of force” for reporting and tracking purposes and officers are required to complete only an incident report. If officers are required to use force in order to defend themselves or another person against an immediate threat of significant physical injury from an animal, then all use of force procedures and processes from this general order apply.

P.   USE OF FORCE RECORDS AND ANALYSIS