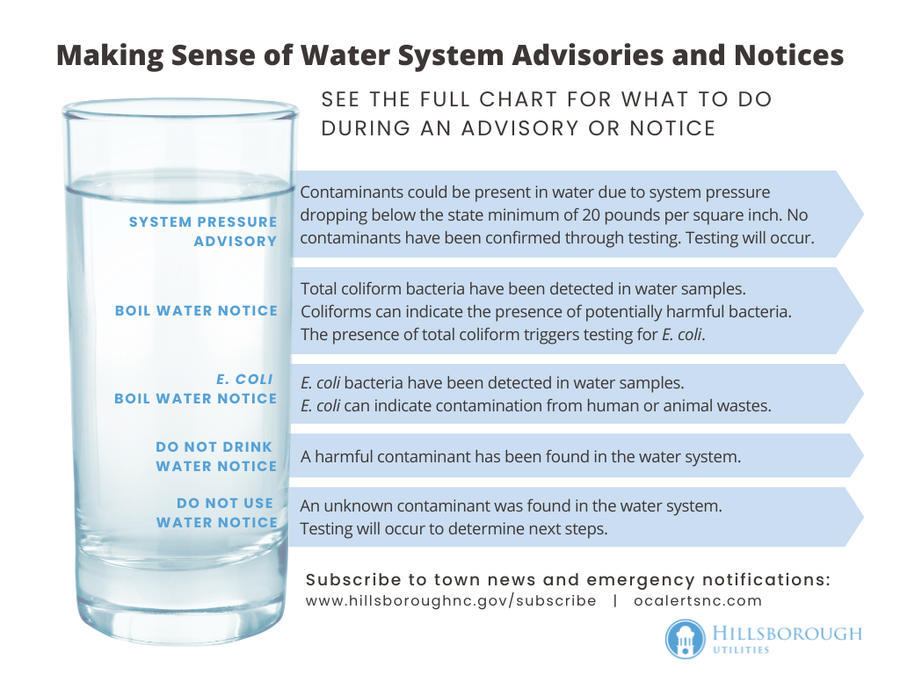 At times, the town may issue an advisory or notice about its water. Below are answers to frequently asked questions about these advisories and notices. Click on a question to view the answer.

The full chart Making Sense of Water Advisories and Notices (in the Documents section below) provides a quick glance at what these advisories and notices mean and what to do during the advisory or notice period.

What is a system pressure advisory?

A system pressure advisory is a public statement issued when the water system pressure has dropped below the state minimum of 20 pounds per square inch and contaminants could be present in the water but have not been confirmed through testing. Through these advisories, customers are advised to boil tap water or use bottled water for consumption until further notice. Results from bacterial testing of the water are returned in 18 to 24 hours.

What is a boil water notice?

A boil water notice is issued when total coliform bacteria have been detected in the water system. Coliforms can indicate the presence of potentially harmful bacteria. The presence of total coliform triggers testing for E. coli bacteria. During the time period of a notice, all affected customers must boil their water or use bottled water for consumption. Notices are placed on streets and in neighborhoods that are affected. Results from repeated bacterial testing of the water are returned in 18 to 24 hours.

What is an E. coli boil water notice?

An E.coli boil water notice is issued when E. coli bacteria have been detected in the water system. E. coli can indicate contamination from human or animal wastes. During the time period of a notice, all affected customers must boil their water or use bottled water for consumption. Notices are placed on streets and in neighborhoods that are affected. Infants, young children, some of the elderly, and people with severely compromised immune systems are at greater risk.

What is a "do not drink" water notice?

A do not drink notice is issued when a harmful contaminant has been found in the water system. During the time period of a notice, all affected customers must use bottled water for consumption. Notices are placed on streets and in neighborhoods that are affected.

What is a "do not use" water notice?

A do not use notice is issued when an unknown contaminant has been found in the water system. During the time period of a notice, all affected customers must use bottled water only for any purposes. Notices are placed on streets and in neighborhoods that are affected. Testing will occur to determine next steps.

When are system pressure advisories issued?

System pressure advisories are issued when an event has occurred that could have allowed contaminants to enter the water distribution system. Such events would include a water main break, small or widespread loss of system pressure, or a natural disaster.

In some cases, the town’s field staff can make repairs to a water main while the main is under pressure, which prevents bacteria and any contamination from the soil from entering the distribution system. When this process is used, no advisory is issued. In addition, an advisory may not be issued if the cause for contamination in an initial water sampling result is known and is being addressed promptly.

A boil water notice may be issued if a routine water sampling tests positive for total coliform bacteria but not E. coli bacteria. Repeat samples are taken at the same source as well as up and downstream of the source.

If repeat samplings are positive for E. coli, an E. coli boil water notice is issued to the affected areas regarding the sample.

The town’s water treatment process removes total coliform bacteria from water, but events such as a water main break or a loss of pressure in the water distribution system may allow these bacteria to enter water lines through cracks in pipes or back-siphoning from a residential plumbing system. Total coliform also can be detected if a dead-end water main has little water turnover. The town can address this by flushing the mains more frequently to ensure the presence of fresh water and appropriate chlorine levels. In any of the above situations, boiling water vigorously for one minute will kill these bacteria and make the water safe to drink.

Total coliform bacteria are a collection of microorganisms that live in large numbers in the intestines of humans and animals, as well as in most soils and surface water. A subgroup of these microorganisms is the fecal coliform bacteria, the most common member being E. coli. These bacteria occur naturally in lakes and streams, but they indicate that the water is contaminated with human or animal waste and may pose a health risk to people who drink it.

Who will receive a boil water advisory?

For isolated incidents, such as an incident related to a water main being repaired, the town will notify only the water customers affected or served by the water main in question. The notification will be provided by placing door hangers at each customer’s residence.

If the advisory or notice is widespread, other appropriate notification measures will be used to assist the town in informing the public. Customers are encouraged to:

How long is a boil water advisory or notice in effect?

What should I do if an advisory or notice has been issued?

During the period of the advisory or notice, consumers are advised to boil all water or use bottled water for any human or pet consumption. This includes for drinking, ice making, brushing of teeth, pet water, handwashing, dishwashing and food preparation. Vigorous boiling for one minute should kill any disease-causing organisms that may be present in the water.

Infants below the age of 6 months and pregnant women should use an alternate water supply, such as bottled water, whenever possible during an advisory or notice. Boiling water concentrates any levels of nitrates that may be present in the water.

The town also encourages water conservation during an advisory or notice.

Do I need to boil my water if I have a filter system on my faucet or refrigerator?

Yes. Most point-of-use filters are designed to improve the aesthetics of water ― taste and odor ― but not to remove harmful bacteria.

Is the water safe for bathing and washing dishes or laundry?

During a do not use water notice, water should not be used for any purpose.

Water can be used in the following ways during a water system pressure advisory; a boil water or E. coli boil water notice; or a do not drink water notice:

What should I do when an advisory or notice is lifted?

If contamination of the water system did occur, you should flush household pipes, ice makers, water fountains and the like prior to using water for drinking or cooking. Flushing is letting water run to ensure no contaminated water remains in your pipes. Follow these guidelines:

What should I do if my water is not clear?

Following an advisory or notice, you may experience discolored water, which can appear to be red, brown or milky and which can be caused by harmless sediment or air bubbles. To clear the discoloration, the town advises you to run cold water through your bathtub or other faucet for 5 to 10 minutes. If discoloration persists, contact the town immediately.