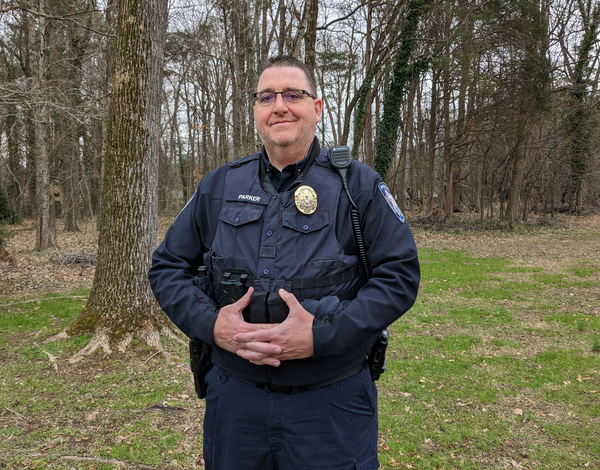 Lt. William “Buddy” Parker said he will most miss the people he works with throughout town when he retires.

Hillsborough Police Lt. William “Buddy” Parker will retire Feb. 1 after nearly 28 years with the town. His last day on the beat is today, Jan. 17.

“I do not think there is any way I could overstate how much of an asset Lt. Parker has been to the town and to the department,” Hillsborough Police Chief Duane Hampton said. “He has served in virtually every aspect of our agency’s operations, he is a wealth of institutional knowledge, he is a leader, and he is well respected by our employees, our peers and the public. His retirement is well deserved ― he is a true public servant ― and he will be deeply missed.”

Parker began his career with the Police Department in March 1995 as a patrol officer. In 1999, he was promoted to corporal and served as a patrol supervisor. In 2001, he became sergeant, serving in patrol supervisor, traffic enforcement unit, community policing and training capacities. Last July, he was promoted to lieutenant and has been overseeing the day-to-day operations of two patrol squads.

He said he has most enjoyed the people he works with and serves, the feeling of community, and helping those who need help.

Prior to joining the town, Parker worked in private security and as a reserve deputy for the Orange County Sheriff’s Office. As a lifelong resident of Orange County who lives just on the outskirts of Hillsborough, he said he wanted to give back to the town that made him who he was.

“Since I was 5 years old, I said I wanted to be a police officer,” he recalled. “In most every way, it has met my expectations.”

Parker knew what he was getting into before starting basic law enforcement training at Vance-Granville Community College, graduating from the academy in November 1993. From the ages of 14 to 21, he participated in the Explorer Program of the Sheriff’s Office.

Instead, Parker has served as an ambassador for Hillsborough over the years, he said.

“What we’re doing is we’re trying to show everything that the department and the town does for everyone in the town and visiting the town,” he said. “We try to show them our best sides.”

In retirement, Parker plans to spend his first 6 to 12 months relaxing and decompressing from nearly three decades of law enforcement. He hopes to travel, spend time with his son and possibly return to school.

“I have absolutely enjoyed my time here, and I will miss everybody I have worked with in my career,” Parker said. “I wish all of the officers in the agency the best of luck, and please be safe.”

Apply to work for the town