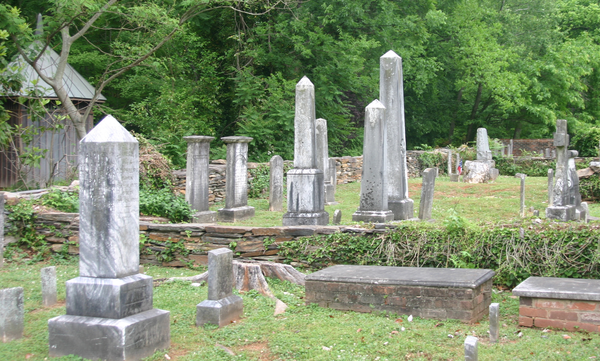 The Old Town Cemetery is located at the corner of Tryon and Churton streets.

Grounds maintenance of town cemeteries is managed by the Public Space and Sustainability Division. The Public Works Division oversees cemetery operations and burials at the Town Cemetery.

Margaret Lane Cemetery is located on the south side of West Margaret Lane between South Occoneechee Street and South Hillsborough Avenue.

The cemetery, sometimes called the Old Slave Cemetery, first appears in written records in 1885. It is believed the two 1-acre lots were purchased from the town in 1854 as a burial ground for slaves. Anecdotal evidence suggests burials occurred there even earlier. The site continued as an African-American cemetery after the Civil War. The town restored the cemetery in 1987.

The Old Town Cemetery was established in 1757 and contains 184 marked graves, including many of the town’s notable early residents. It is located on the corner of North Churton and West Tryon streets, at the former site of St. Matthew’s Church.

Among the cemetery’s earliest known graves is that of William Hooper, a lawyer who lived in Hillsborough during the late 18th century and was one of three N.C. signers of the Declaration of Independence. Hooper's remains have since been moved to the Guilford Courthouse National Military Park in Greensboro.

Other important figures buried in the cemetery include early settlers, such as:

The Hillsborough Town Cemetery is located at 200 E. Corbin St. Its entrances are on North Cameron and East Corbin streets. All plots in the cemetery have been sold.

Funeral homes and monument companies are responsible for making arrangements for marking gravesites or monuments. Residents should not contact the town for these arrangements. For more information, see the Town Cemetery regulations page.

Burial records can be searched online. The maps available in the brochure and maps below provide the approximate location of grave sites. If you need additional assistance to locate a grave site, please call 919-296-9600.